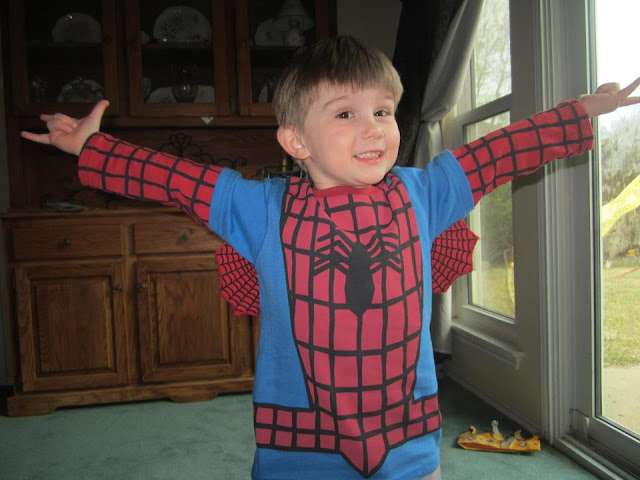 Isn't he the cutest Spiderman EVER?? :)
This is our 3 year old grandson Charlie.  You can read about many of his adventures along with his brother Will and baby sister Olivia over on Ivy's blog.

This picture brought back a memory of our family when I was much younger.  Our oldest son was just 3, just like Charlie.  He too was fascinated with Spider Man, but he didn't have that fanstastic fancy shirt! LOL
He settled for capes with clothespins for Super Man, and Spidey just had to flow from his imagination.
One day, it was time for his nap.  He REALLY didn't want a nap; what three year old does!
I had put the baby down, and the other baby down and it was time for him.
Sometimes I wish I had let him stay up just to spend extra time with him.... But he really DID need his naps.
I was walking over to scoop him up to put him to bed and he did that famous hand motion..... "HA! You're in a web!"
I could have done two things.  I could have seen his reluctance as disobedience, because he really was trying to get out of taking a nap.  Or I could buy into his playful moment, enter his world, and capture his heart.
I chose the latter.
Pretending I was stuck in his web was actually quite fun.  He laughed with sheer glee at the sight of mommy on the floor, stuck under his powerful web.
And after a few minutes, I broke free and he obediently went to his nap, very satisfied that he was a real Spider man for just a moment, and his web action had finally worked. :)

I'm very excited to be spending the day with the Adorables on Thursday! :)

there really is nothing more wonderful than a three year old spiderman. :-)