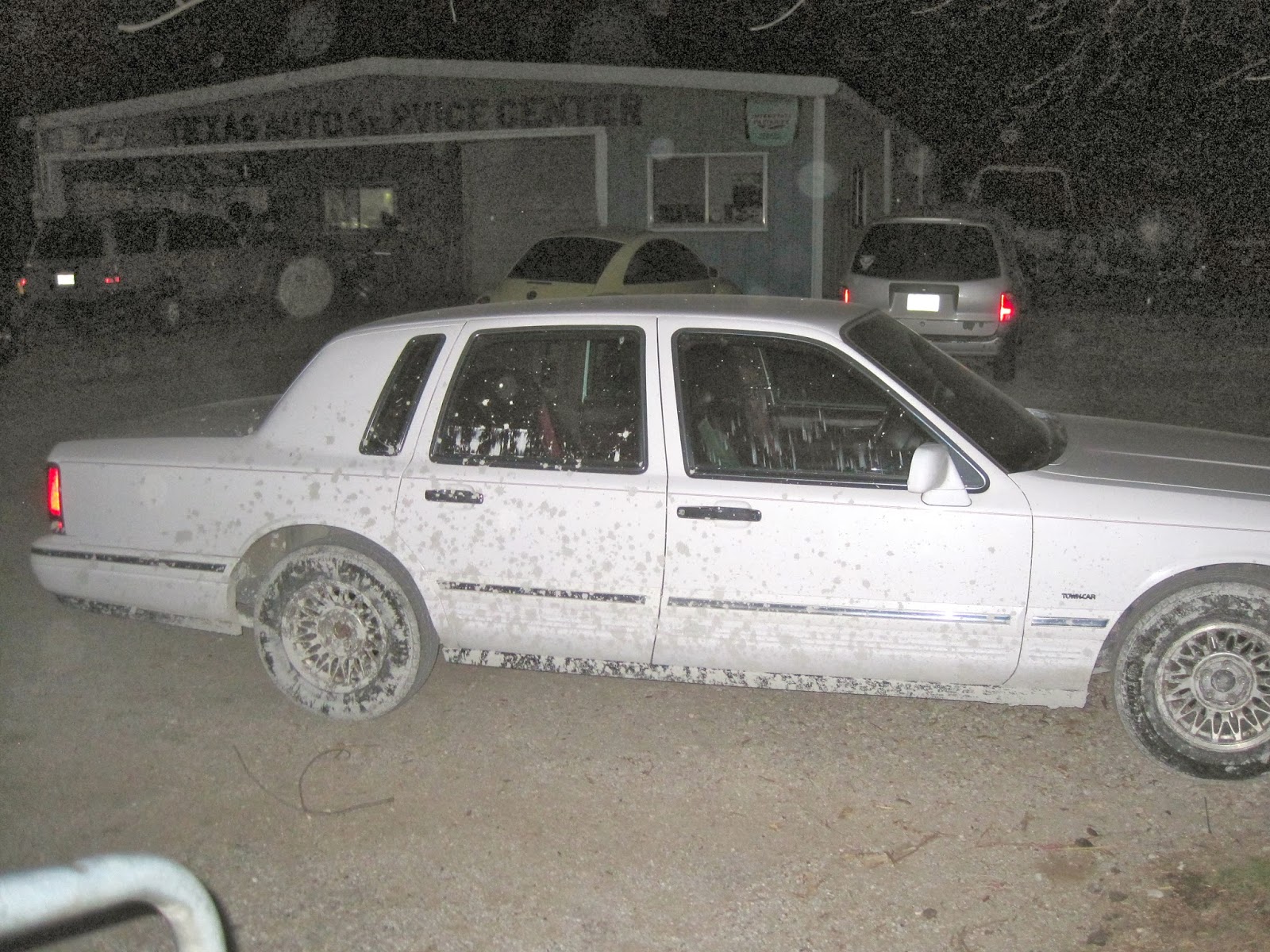 Yes, this is my car.  It was clean when we left for the airport to pick up Becca's mom, who is staying in Texas for 2 weeks.

On the way back from the airport, late at night, I might add, we drove right into a construction area!
We were like lemmings jumping off a cliff.... one car after the other, and we got stuck in the group!

A large truck was in front of us about 5 cars up, and we could not see any signs.  The one lane apparently split into two. The truck went into the construction area, and so did everybody else!

The signs were awful. Once you saw it, it said, "Road Closed" but it was between where the lanes split and impossible to tell unless you had a clear view.

Things got worse from there. Some folks tried to turn around... ON A FWY and go the other way.
Seriously??
We stayed put and a very grouchy fellow with lights flashing seemed to need to remind us that "This is a Construction zone!"  Well duh!

He told us to wait.  At this point there were 3 cars in front of me, and about 10 behind me.
He then started to lead us through the area.  Down, down, down, into a VERY SCARY area with large trucks and heavy equipment digging and putting huge chunks of cement into the trucks.
All of the sudden, the guy 3 cars up stopped and turned around.  We say the truck do the same, so we started to do the same thinking it was a dead end.
Grouchy guy YELLS AT US.... STAY THERE!
Apparently the nut in front of us decided not to follow the guy.

Finally, a really nice fellow drove up with a big smile and said, "I'm going to stop everybody and I'll come back to get you and lead you out of here. "
So we waited. He came back and did just that.
Another mile through some really rough areas and then he drove up under a construction area with a lot of cement overhead.  He waved his arm like, "common' it's ok" and we drove up and out of there. He told us to have a nice night!
And we were SO THANKFUL!
Man that was scary!
My son's mom in law thanked me for the adventure! LOL

Now I need to wash the car again.

Posted by Christie M at 1:49 PM No comments:

There was a murder in our neighborhood.  It happened behind the high school that Anna attends.
The young man murdered, was an ROTC student that Anna knew well.

Sadly, we found out that the murderers were also students. One of them, was in ROTC and Anna knew him well, the other she didn't know well.

We have all been very saddened by this news.

Honestly, my gut instinct is to rip her from the school and bring her home.
I don't know if that is a wise idea.
At least not yet.

This is the SECOND time a child has been murdered by "friends" at the same school, in 2 years.

Something is VERY WRONG.

We feel safe in Wylie, and always have, yet such henious crimes have happened so close by!

The thing that disturbs me so much about this one is that the kids knew each other well.
It was PRE MEDITATED and these young men took this young man's life by strangling the life from him and then taping a sock in his mouth and cover his nose to make sure he was dead. :(

How can something like that be done so callously??  I just don't get it. :(

I met one of the young men. He seemed like a nice, normal kid. He helped Anna with her algebra at the beginning of the year and she borrowed his cell phone to call home after a foot ball game that they worked chains on.

I am so creeped out!

Please pray for our sweetie girl.  She is very sad for her friend that lost his life, and very confused about the ones who committed the crime.

She is doing well, considering the situation.

Labels: Thoughts
Posted by Christie M at 10:48 AM No comments:

The EPIC Ya Ya Failure!

So, last night I was supposed to baby sit for Joe and Becca so they could go to a dinner being held at the University where Joseph works.

I had it on my calendar and popping up on my computer to remind me every two hours.  Joe even CALLED me in the morning.  All was a go!

At around 4, I went with Mike to look at some wood that needed to be split.  After that, he suggested we go to Walmart to get a few things.  I happily went along with him, and it was in the middle of Walmart that I realized I had FORGOTTEN to babysit!

We rushed as quickly as we could out the door and he got me home. I jumped out and got on my cell phone to call them and say I 'd be there in 20 minutes.

Becca is so gracious.  She said not to worry, she was already back in PJ's and Joe had gone to the banquet alone.  :(

So we talked and I told her I was coming over anyway.  I brought her a Salted Carmel Bar from Starbucks and groveled some.

I stayed over and we talked and watched the boys play.  Baby started WALKING! He took his first steps and we were overjoyed.
Then Truman was just so sweet.  He was snuggling with his mama and so happy she didn't leave.

Same played with his legos and tried to sell me a picture he colored for 30 dollars! LOL
He did get a dollar....

We had a nice visit and when Joseph came home he was so gracious.
His only question.... "Where were you at the moment you realized you had forgotten?"
So we could all laugh. :)

He then confessed to forgetting a good friend at the airport. LOL
All in all, it turned out to be a good night, and I owe them a night out.

Joe said that none of the other wives attended either, so all was well.