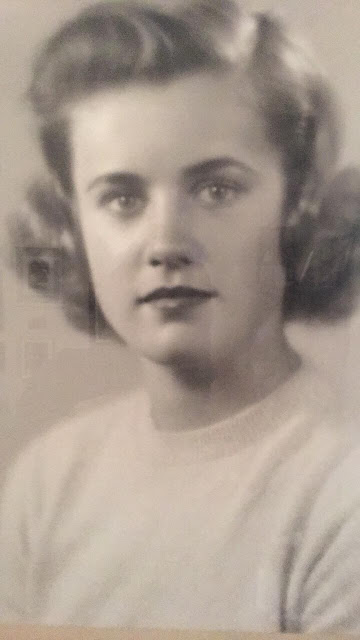 I have written about my Dabba many times.  This November 2nd, she would have been 99.

I was not able to see her again.  I wanted to so badly, but she was just too far away. We did however talk on the phone now and then.

Dabba was one of the most important, influential people in my life. She taught me so much about love and acceptance, strength and humility.  She possessed an inner strength like nobody I have ever met.  And she was witty and funny.

EVERYBODY needs a Dabba in their lives.

She got her name from our nephew Sean, who was the very first grand child. He couldn't say gramma and called her Dabba.  And that was her name forever! Even if she went to another country, which she did many times... those she met knew her as Dabba.  :)

One of the special things that happened a couple of years ago, was that our sons, all made a trek to visit her, knowing that at 97, she didn't have much more time.
The other reason they were going was to forgive their bio dad.  He lived not too far away from her and was being cared for by his brother and his wife.

I am SO PLEASED that our guys took the time with our nephew to go and visit her and to visit him.

It was not long after, that the boys bio father passed away from a chemo treatment gone bad.

What a blessing that it was for them to be able to visit both together on a special guy trek, and to have some closure for past events in their lives.

There is a great photo of them all sitting playing spades together and their bio father watching intently from his chair.

If you didn't know already, Mike adopted the guys when they were little, about 28 years ago.
So technically all 8 of our kiddos were adopted. :)

I miss my Dabba and think of her all the time.  What a blessing she was and continues to be.